“This is a China book you read through in one go.”

Australia’s first Ambassador to the People’s Republic of China

Lazy Man in China is the story of China over two decades — its transition from Old Communism to New Capitalism — intertwined with the love story between former Beijing correspondent Helene Chung and her late partner, John Martin. John is the self-dubbed lazy man employed at the Australian Embassy. His witty, perceptive, self-deprecating letters to family and friends have inspired a book interwoven with ninety colour photographs of China past and present. The forgotten art of letter-writing brings a vanished China into the email age: Beijing is ‘a fascinating and most exotic place in a repressive and sinister sort of way.’ Lazy Man in China is John’s witty, perceptive, self-deprecating take on the People’s Republic, drawn from letters to family and friends, and edited and updated by Helene.

Published by Pandanus in 2004, the twenty-first anniversary of Helene’s appointment as the first female posted abroad by the Australian Broadcasting Corporation, it recalls a nervous ABC male news chief warning, ‘There’s a lot riding on your appointment.’

John accompanied her and worked as ‘the token Australian and the token man’ in the Australian Embassy aid section. His images are shot through with colour, ironic humour and insight as Old Communism gives way to New Capitalism. He didn’t live to see the China that she would experience in 2002 and beyond: the cosmopolitan China of BMWs, new rich, new poor, a Tiananmen Square emptied on the thirteenth anniversary of the massacre by a World Cup soccer game viewed on giant screens, and a powerful rival challenging the US in world supremacy.

Lazy Man in China has 90 colour photographs (by Helene Chung and John Martin) interspersed throughout the text. These few contrast Old Communism with New Capitalism. Women tend to the household chores while the father relaxes with the People’s Daily in a typical family scene that spills out of the home and onto the street in overcrowded Shanghai. (John Martin) New washing, old cycling, Huzhou 1986. In the early eighties Chinese aspired to the four things that go round — a bicycle, a watch, a fan and a sewing machine. By the late eighties they dreamt of the four big things — a washing machine, a refrigerator, a cassette recorder and a television set. Now they lust for the four luxuries — an apartment, a car, private education and overseas travel — and perhaps a pet pooch and a concubine too. (John Martin) Lazy Man laid back in model workers’ village, 1984. This sign is adapted from the patriotic finger-pointing Uncle Sam poster, ‘I want you!’ and represents the new China. A model worker in a safety helmet points his finger and exhorts: ‘Quality No 1, Safety No 1,’ that is, quality must be achieved through safe work practice, especially the wearing of a helmet — a novel concept to China in 1984. Below the sign rust abandoned workers’ barrows, their handles pointing — almost as if in aspiration — upwards. Caught by the irony, John Martin couldn’t resist the temptation to collapse into the tray of a dusty barrow, in defiance of the order to work. (Helene Chung) Winter Diet 1984. In the 1980s cabbages were almost the only vegetable available during Beijing’s long dry sub-zero winter. Chinese carted them home on their bicycles, a few at a time, up to their ration of about 200 per family. They stored them for months on balconies, stairways, bedrooms and living rooms, and consumed pickled cabbage, cabbage dumplings, stir-fried cabbage and other forms of cabbage. Now, every sort of vegetable is available in fresh markets and in gleaming modern supermarkets. (John Martin) 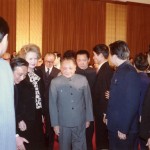 Iron Lady hands over to Strongman, Great Hall of the People, December 1984. British Prime Minister Margaret Thatcher with triumphant Deng Xiaoping (in Sun Yatsen suit), minutes before she handed over Hong Kong by signing the Joint Declaration with Prime Minister Zhao Ziyang (wearing glasses and Western suit), and promised the enclave a ‘high degree of autonomy’ under Chinese rule from 1997. As fate would have it, Deng went to meet Marx months before the transition, while Zhao was put under house arrest for his moderate stand during the 1989 democracy movement and languished out-of-sight until his death in January 2005. (Helene Chung) Avenue of Eternal Peace, Beijing 2002. China’s capital with its citadels of commerce enveloped by smog and its main thoroughfare clogged by cars. This was predicted by ABC interpreter Old Fan in the 1980s. One afternoon, when we were driving along this road, then almost deserted and only minutes from the bureau, he said with pride in China’s modernisation: ‘One day Beijing will have so many skyscrapers and so many cars it will take an hour to reach the office!’ (Helene Chung) Where are the Mao suits? A lavish Western-style wedding at Shanghai’s Peace Hotel in 2002. A long march from the mass wedding I witnessed at the Beijing Hotel in 1985 of fifty couples, who celebrated their vows with a feast of peanuts and crackers. (Helene Chung) KFC route. Shanghai’s footsore are carried with the colonel past the golden arches along Nanjing Road. (Helene Chung) 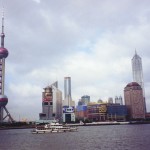 Pudong from the Bund, Shanghai. The rocket-like Oriental Pearl TV Tower and the pagoda-like Jin Mao (second from right), in 2002 China’s tallest building, epitomise Pudong, the high-tech finance and trade centre that arose as if overnight in the nineties, and is central to Shanghai’s ambitious goal to overtake Tokyo as finance capital of the East. This view is from the Bund, the historic waterfront along the Huangpu River. (Helene Chung)

Listen to Helene on Lazy Man in China Letters

Others have written about China today, but Lazy Man in China records the experiences and impressions of two discerning and talented observers during the past 20 years in a manner that is both memorable and thoroughly diverting, not least with the help of its many apt illustrations. This is … a fascinating, beautifully produced book.

a Professor of English at the Australian National University, Canberra Times, 19 February 2005

>’Anything but a “lazy man” in perceptive letters’

This is one person’s wry and perceptive account of China at the end of its era of Mao-style Communism … a fascinating insight into Chinese life and culture at a time when the country was going through major social and political changes.

While an engaging historical read, Lazy Man in China is also a bittersweet love story … a good read for those wanting an insight into the massive changes happening in one of the world’s most powerful countries.

John Martin’s … letters are appropriately punctuated by Helene’s own comments, on occasions correcting some political or historical detail her partner had got askew. Her comments are also enlightening in offering views of her own journalistic commitments … the huge toll taken on her by an almost inhuman work load as she traipsed all over China to cover stories, often with him as the offside onlooker commenting on the often comic, but frustrating red-tape of a country changing yet still tied down under communist hard-line rule. The letters also document the depths of the most unusual relationship that Helene and John shared, at once wistful and powerful.

A duet in letters and commentary spanning over two decades. Lazy Man in China tells of a conjugal life involving work, travel and discovery in China; it is the story of a life set against the backdrop of a country experiencing radical economic transformation and social upheaval. This is also a book that gives voice to a double nostalgia — both for the ‘old’ new China and for a partnership rent by loss. It speaks of the past and the present; it is a touching memoir and a particular Australian account of a unique time.

This is a China book you read through in one go, drawn by the writer/editor’s need to catch and hold images of a Beijing of 20 years ago and of the love of her life who went there with her, reluctantly (and who a decade later she lost to cancer). From his letters to family and friends and her connecting comment she presents a very intimate China reportage that is personal and conversational, with often unfashionable private judgments that could be made without having to be careful. It is at once a wistful love story … and a dialogue between her and her late partner about China as they found and judged it then, like oral history. Its fascination is in how it brings back the foreigners’ ‘China life’ of that time, and the way foreigners’ perspectives and judgments were formed, and what they were supposed to see, and what they saw and thought. This will be its value for those who study China, or who just want to know.

Australia's first Ambassador to the People's Republic of China

‘This book is funny, serious and perceptive …  a labour of record and of love, and is well worth reading.’

truth is stranger than fiction 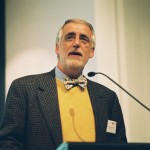 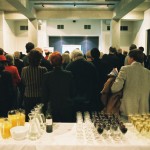 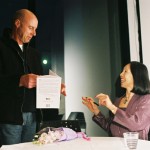 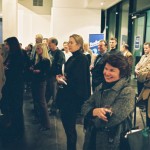 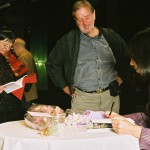 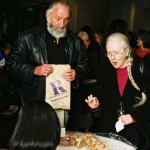 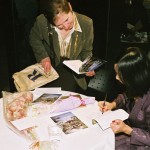