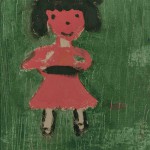 Helene Self Portrait at 8 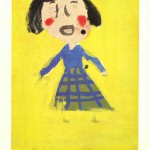 Big sister Lehene Self Portrait at 6 Helene and Lehene at home with Tabby Mandy and German Shepherd Tossi, Hobart, 1967

Chinese Australian-born journalist Helene Chung (He-LANE CHUNG as in HUNG), who grew up in an unconventional family in 1950s Anglo-Celtic Hobart, led the way to a new egalitarian Australia as its first non-white television reporter and, as Beijing correspondent, the first female posted abroad by the Australian Broadcasting Corporation.

A fourth-generation Tasmanian, whose maternal great grand-father landed as a tin miner in the 1880s, she is the author of Shouting from China, Gentle John: My Love My Loss, Lazy Man in China and Ching Chong China Girl: From fruitshop to foreign correspondent. An Honours graduate and Master of Arts in history of the University of Tasmania, she has reported from Australia, Hong Kong, Britain, Egypt and China and freelanced for BBC, BFBS, CBS, NPR, NZBC and Hong Kong radio.

Helene and her older sister, Lehene (Lay-HEEN), were the only two Chinese in almost all their years at St Mary’s College: the only two who were taunted by ‘Ching Chong Chinaman’, a term of abuse now so out-dated it has to be explained to young Australians. Today Helene can satirise herself as a Ching Chong China Girl.

Among 500-600 pupils Helene and Lehene alone had a divorced mother. She insisted on using her maiden name when all the other mothers were Mrs So-and-So. Shocking Miss Henry posed as an artist’s model, ‘lived in sin’ with a so-called foreign devil (a derogatory Chinese term for any non-Chinese), and drove a red MG.

Surviving the embarrassment of childhood, Helene revelled in campus theatre as an actor/director of the Old Nick Company. Undecided on a career, she continued study until she fell from the back of a Tasmanian tiger into journalism. During a break from dusty volumes of Hansard (for her thesis, ‘Parliament, Press and Prejudice: the Jewish Question in Britain, 1890-1905’), in 1968 she recorded her first interview – with a butcher who claimed to have sighted the extinct thylacine – and it was broadcast next morning on ABC radio’s national flagship, AM. 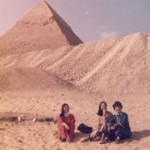 Helene, Lehene and their mother, Dorothy, at Giza outside Cairo, Egypt, 1973 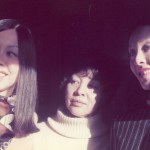 Helene, her mother, Dorothy, and Lehene in London, Christmas 1979

Helene interviews His Holiness the Dalai Lama in Melbourne during his first visit to Australia, ABC TV’s Nationwide, 1982

After more freelancing she applied for an ABC traineeship and was interviewed by a mainland official. ‘You’re as good as some of the best boys,’ he said. ‘But you have to understand that all things being equal, if we have to make a choice between a boy and a girl, we’ll have to choose the boy because you’re only going to get married and all the training would be wasted’. She sat nodding in agreement.

Although rejected as a trainee – with no girl appointed – she wasn’t out the door. There happened to be a vacancy in Hobart for a Reporter Grade 1 and she was asked to act in the role. So, luck let her begin at a level above a trainee.

For the next three decades, Helene would face serial rejection and not once waltz through Aunty’s front door, only enter through the back.

After six months with the Overseas Service, Radio Australia, Melbourne, in 1970 she resigned for overseas experience and for three years freelanced with her Uher tape recorder:

In sultry Singapore she was helped by Tasmanian cameraman Neil Davis, who would capture the fall of Saigon in 1975.

In humid Hong Kong during the period of ping-pong diplomacy she covered Australian Opposition Leader Gough Whitlam’s venture into Red China just days before Kissinger’s secret visit, but didn’t receive ‘the good word from Peking’ to permit her through the Bamboo Curtain.

In still swinging London at Buckingham Palace she scooped the first radio interview granted by Princess Anne: it was broadcast in Hong Kong, Britain, Australia and Canada, with the story making front page of the Times of London.

And in chaotic Cairo advancing towards the Yom Kippur War, she regularly held a candle to stumble up six flights of sawdust-strewn stairs to sit anxiously awaiting the censor’s purple stamp of approval, as he checked her typed copy by the aid of his own flickering candle.

Down Under again she joined ABC Sydney’s AM/PM team before Tasmania’s This Day Tonight lured her in late 1974, when she became the first non-white reporter on Australian television. Assigned to interview a John Martin, she met her former classmate, by now a mainland history lecturer. This triggered a transfer to Melbourne and their life-long love. Years later, after his death through cancer, her emotional outpouring would be published as Gentle John: My Love My Loss. In 2001 Lehene’s death, also through cancer, would deepen Helene’s experience of love, loss and grief.

In July 1978, three years before the advent of multicultural SBS TV in October 1980, ABC’s new head of current affairs, Derek White, resolved to remove Helene from television due to her Asian appearance and ‘make-up that accentuated her narrow eyes’. This prompted the tabloid Truth headline: ‘TDT GIRL CLAIMS ABC RACE SLUR.’ Though Helene never learnt the source of this report – and she refused all media requests to discuss the issue – it proved one of the few error-free stories she’s read about herself. Nonetheless, she stayed on screen and the case was settled through intervention by the flamboyant Commissioner for Community Relations, Al Grassby. The White plan to banish her disappeared.

ALIEN IN THE MOTHERLAND John Martin as the self-dubbed Lazy Man in a remote part of Shanxi Province, China, 1984 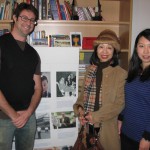 White snow-bound London’s Great Japan Exhibition at the Royal Academy of Arts so impressed Helene that she determined to see the Land of the Rising Sun. She spent her next summer recess in an intensive Japanese course in Canberra, where she was interviewed for the position of ABC Tokyo correspondent. True to form, she was rejected. Then, suddenly, she was appointed to Peking, as the Chinese capital was then called, and shot to the Middle Kingdom. As she boarded her craft the words of the ABC’s male news chief, nervous about posting a female abroad for the first time, rang in her ears: ‘There’s a lot riding on your appointment.’

She landed in Beijing’s stifling summer heat of 1983 conscious of her Chinese heritage but not feeling Chinese. The next three years would make her feel even less Chinese and more assuredly Australian. Treated as a foreigner, housed in a walled diplomatic compound with armed guards at the gate (ostensibly to protect the residents but actually to protect the Chinese interpreters, drivers and cleaners from Western pollution such as free speech, freedom of association and perhaps pornography), discouraged from mixing with the locals, and charged high foreigners’ prices in a three-tier price system (with locals paying least, overseas Chinese paying more and foreigners paying most), she was an alien in the motherland. 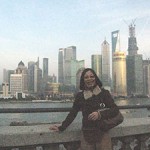 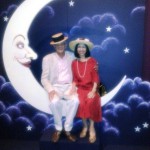 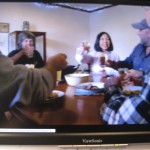 Although John had favoured the idea of life in Japan, he no more wanted to accompany her to the then backward China than to Afghanistan; yet he agreed. He worked at the Australian Embassy aid section and later freelanced as a reporter. His witty self-deprecating letters from Beijing to family and friends would be incorporated into Lazy Man in China – the story of China’s transition from Old Communism to New Capitalism, with ninety colour pictures, interwoven with the couple’s own love story.

Shouting from China recalls the shouting that often cost Helene her voice as she filed over a dilapidated telephone system. She wrote her first book as Edward Wilson Fellow in Journalism at Deakin University, Geelong, where she would later teach journalism while a specialist reporter on North Asian affairs at Radio Australia, Melbourne. She also presented the daily International Report on Radio National.

In 1998 Helene began fifteen years as an adjunct research fellow at Melbourne’s Monash Asia Institute, which assisted her in writing her autobiography, Ching Chong China Girl: From fruitshop to foreign correspondent.